Are You a Renaissance Humanist?

Many people believe that a mother’s bond with her child is like no other. In Matsuo Basho’s short story “The Aged Mother,” an evil ruler, frightened by failing health and strength, orders all the aged people in his village to be executed. One of the villagers refuses to kill his mom. After seeing her love and compassion for him, he decides to hide her instead.

In the story, the author believes that love often compels people to make selfless decisions, even in the direst of situations. This is shown when the villagers are ordered to put all the elderly people to death; “with many deep and hopeless sighs, the youth prepared for what at that time was considered the kindest mode of death… [the son] lifted his helpless old mother on to his back and started his painful journey up the mountain.” (Basho, 1). Although it would be a tiring and dangerous journey for him, the son decided to take his mother to the top of the mountain just so she wouldn’t be in any pain when she passed.

As the story continues, we see this reoccurring theme of selflessness again when the son sets down his mother and is about to make his way back home. “The trembling mother’s voice was full of unselfish love as she gave her last injunction. ‘Let not thine eyes be blinded, my son.’ She said. ‘The mountain road is full of dangers. LOOK carefully and follow the path which holds the piles of twigs. They will guide you to the familiar path farther down’” (Basho, 2). Even in her last moments, the mother was still concerned about her son’s safety.  She went out of her way to make a trail for his decent. This demonstrates how true love makes people put others before themselves, no matter how awful the situation.

My poem was made from the story “Fish Cheeks” by Amy Tan. In the story, Amy’s parents invite Robert’s (her crush) family over for Christmas dinner. Instead of being exited, Amy feels miserable and embarrassed by her Chinese culture­— especially the food — because she’s scared of what Robert might think. I showed how she felt in the story by using words like “despair” and “disappointment” in my poem.

The conflict in “Fish Cheeks” is character vs. society, or in other words, Amy vs. the Chinese society. I showed this in the poem when it said “my relatives murmured with pleasure ‘Amy your favorite’ I wanted to disappear” we can tell from this sentence that Amy is humiliated by her Chinese relatives and the Chinese food.

I chose a fish as the background to symbolize the climax of the story when Amy’s father embarrassed her by offering her the fish cheek in front of everyone. I also changed the font size in the sentence “I wanted to disappear for the rest of the night.” I made the words smaller and smaller to make it look like they were slowly disappearing.

For the food waste invention project, my partner was Mr. Layman. His favorite food is the baguette, and something that ruins it for him is when they are stale. I decided to make him a baguette warmer so he never has to eat a stale baguette again. One of my biggest challenges when making this project was trying to figure out how to construct it. This project was originally supposed to be made with materials found in your home but since I didn’t have any, I had to use Tinkercad instead.  My biggest success was definitely learning to master Tinkercad. I had used the website before but it was always with the help of others. I used to find it tricky and frustrating to use, but now I can navigate through the website with no problem. If I had more time to work on my project I would try and find a way to make the lid move so you could open and close it.  I would also add little details like the powerhouse outlet and the on and off switch. Overall, I think my project is pretty good given the time and lack of materials.

My Visit to Ancient Greece 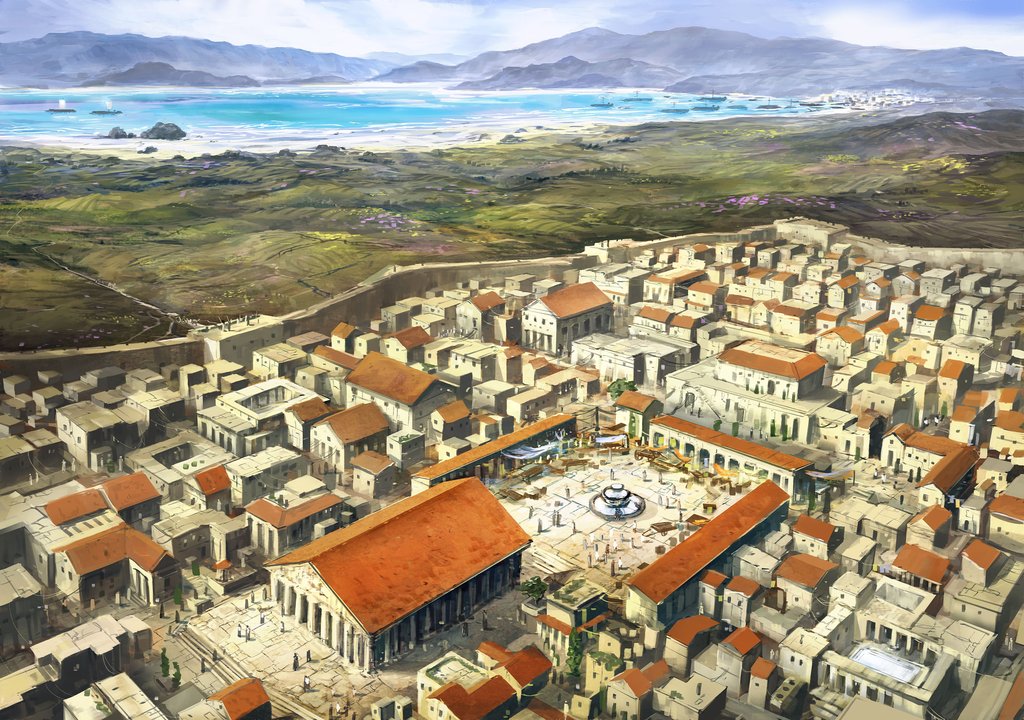 In the book “Percy Jackson and the Olympians” Percy Is faced with many challenges. Percy’s actions and attitude towards these challenges are affected by his emotions and his ADHD.

Percy’s actions could be improved if he learned to manage his emotions better. This is shown on page 18, when he got frustrated from studying for a test, he said: “I threw the Cambridge guide to Greek mythology across my dorm room.” Researchers found that “stopping before you decide, to give yourself a chance to think” could help you control your temper. If Percy stopped to think before throwing his book across the room, he could have made a better decision. Another time this is shown is when Percy got angry at his mother for sending him to boarding school, he says “’ because you don’t want me around?’ I regretted the words as soon as they were out” (pg.39) research suggests that another way to control your emotions is to “consider what might happen as a result, and how your decision might affect others.” Managing his emotions better could help improve his actions.

Percy has a negative attitude towards school because of his ADHD. He finds it challenging to sit and focus. For example, on page seven he says, “I have never made above a c- in my life.” according to cricket media, some of the symptoms of ADHD (attention deficit hyperactive disorder) include “Making careless mistakes in school and not listening most of the time.” this shows that Percy’s ADHD stops him from enjoying school. Also, on page 17 when Percy’s English teacher asks him why he’s “too lazy to study for spelling tests” he snaps and calls him “an old sot.” according to the article, other symptoms for ADHD include “avoiding activities that require focus.” Therefore, Percy’s ADHD influences his attitude toward school.

Percy’s emotions and his ADHD affect his attitude and his choices in his everyday life.

Who Was Percy Jackson in Chapter One

In chapter one of the book “Percy Jackson and the Olympians”, we can see that Percy Jackson is a troublemaker and is not the best at controlling his temper. However, he is still a caring friend. On page two he said, “I hoped that for once I wouldn’t get in trouble.” The book indicates that he has a long history of ruining school trips. Percy also finds it challenging to control his temper. On page nine when he was trying not to get mad at Nancy Bobofit the text says, “I tried to stay cool. The school counselor had told me a million times, ‘count to ten, get control of your temper.’ But I was so mad my mind went blank.” This shows that Percy has been to the counselor many times in the past because of his anger issues. This happens again when Nancy was bullying his best friend Grover, he said, “I’m going to kill her.” and “I wished I decked her then and there.” Even though Percy knew he was going to get into trouble he was willing to do what it took to protect his friend Grover. Throughout the first chapter, there are many examples showing that Percy is a troubled kid but still a kind friend.

“I tried to stay cool. The school counselor had told me a million times, ‘count to ten, get control of your temper.’ But I was so mad my mind went blank.” — pg.9 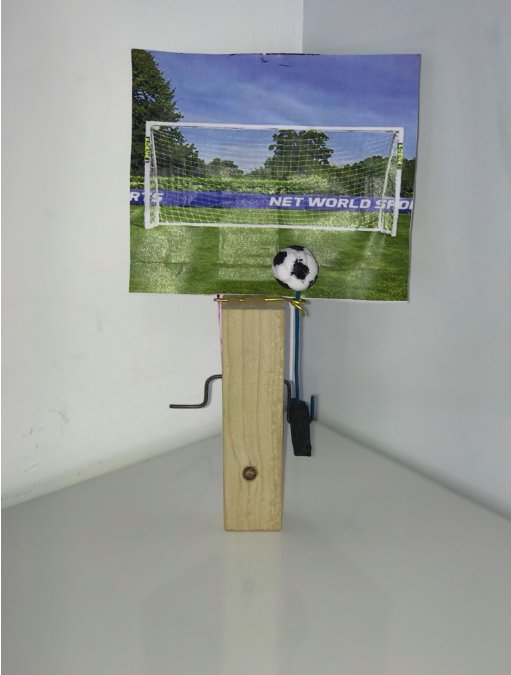 If I were to do this again, I would make the ball go through the goal instead of just hitting it. I could do this by cutting the picture into strips so the ball can go through them.

Overall, I think my project was successful because even though the ball didn’t go through the goal it still puts across a message and my client will still understand why I designed it like that.

Today in humanities we did a simulation on ancient Mesopotamia. We were split into groups, each group had a basket with materials inside. We were given tasks to do like create a language, make a temple, make rules and trade materials. We had to trade until we had the right materials to make a secret invention, the catapult. During this activity, my job was to create a language and trade in the trade in the trade rectangle with our language. As a group, we divided up the workload by assigning one or two people a job each. I think our biggest accomplishment in our civilization was getting all the materials to build the top-secret invention. If our group could change something it would be to work faster because we never got to finish making the catapult.

On one day I made a small bag from recycled plastic bags. First, I cut up the plastic bag into small strips. Then, I used the small strips and braided them together. When I braided them together I used two strips of black and one strip of white to make a pattern. I had to make one big braid for the strap and many smaller braids for the bag. While I was braiding, the chips for the earrings were baking in the oven. After I was finished with braiding the strips, I stuck them all together with tape. After that, I put it in the heat press to stick them together. Then, I hot glued some cloth on the inside of the bag and the straps on the side. My bag didn’t turn out as I expected. I wanted it to be bigger. If I had more time to work on my bag I would add more braids so it would be bigger