Plastic around the globe.

We all know what plastics are and how they are made, but we rarely think about where all that goes. It’s just there and it’s gone, unfortunately plastic is never really gone. They find miraculous ways to get into the ocean, and is deadly to all kinds of creatures, including us. This is based on the United Nations Sustainable Development goals, also known as STGs, number 14.

Surprisingly only few people have realised that plastic can take up to 1000 years to break down, and most plastics have ended up in oceans. “Around 8 million tons of plastic waste ends up in the oceans per day.” (youtube) People have been wondering how plastic can end up in the ocean. Plastic has two ways of entering the ocean. One, littering, throwing plastic waste on the ground to be washed away by the rain and into rivers that will take it to the ocean.Two, throwing plastic down into the sewers. Most sewers end up in a river or a pond, and the river takes the plastic into the ocean. 90% of ocean plastic comes from just ten rivers in Africa and Asia. The ocean is “Home to five notable trash vortexes, collection of small pieces of plastic. According to experts, it is growing ‘exponentially.’”(Baral) These trash vortexes can be the last thing some marine creatures see. 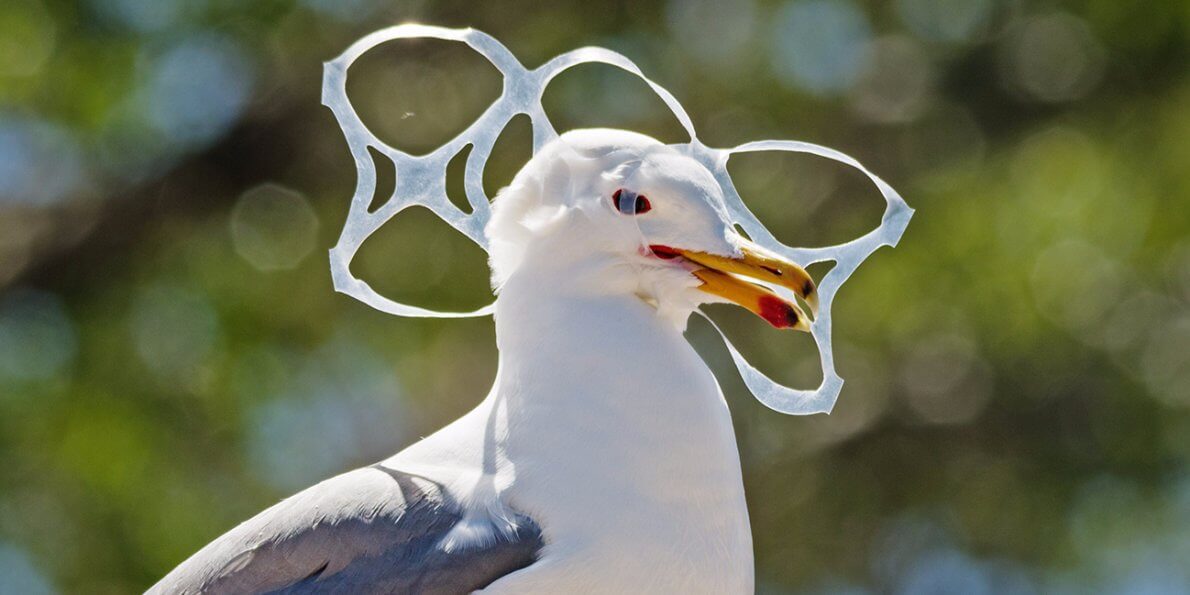 A seagull went diving for fish, but got a mouth full of plastic instead.

When plastics are broken down more, they become micro plastics. Micro plastics are  indigestible and goes up the food chain. The plankton on the surface of the water consumes the micro plastics, then krill eat the plankton and gets micro plastics into the krill’s body, and so on. “Micro plastics have been found in more than 100 aquatic species” (Parker). These plastics that are in the ocean is deadly to marine animals of all kinds, one with eight arms, or with a transparent skull. When plastics enter the ocean, some bigger pieces of plastic get mistaken for prey and marine creatures will eat them. One example is plastic bags and sea turtles, the sea turtles’ favourite prey is jelly fish, but a floating plastic bag looks exactly like a jelly fish. A sea turtle might mistaken it for prey and eat it. Then the sea turtle will have a false sense of a full stomach, but actually it is stuffed to the brim of plastic.So it will starve to death, with a full stomach. The surprising thing is “High income countries generate more plastic waste per person, but most of the plastic that ends up in the ocean comes from rivers in low-to-middle income countries.” (Ritch) This is because Low-to-middle can not afford to use things other than plastic, plastic costs less, and is durable.They also don’t have the money to recycle the plastics.

We have tried different ways of stopping plastic to get into the oceans. One is by stopping the trash to enter the ocean from the mouths of rivers.This is a fairly simple way of stopping plastic of entering the marine ecosystem, but the plastics already in the ocean is harder to clean. We are sending boats with nets on them to clean up the trash vortexes. At first thought, it might seem to be a good idea but the boats are taking a big risk of sinking and if they do, that will add to the amount of plastic waste in the ocean. According to Alicon “‘What the scientists found came as a complete surprise. ‘Most of the plastic is lost,’ says Andres Cozar” We have been losing plastic in the ocean for quite some time now, and if we can not find them, the plastics will stay in the marine environment for quite some time.

Plastic has not only found its way into the bodies of animals, but it has also entered human body systems. Micro plastics will linger in ones’ bloodstreams until they decompose. Plastic pollution has now became such a big problem that only if every single country comes together and try to stop plastic pollution, they will succeed. Even a small action from a small community can make a difference.

In this unit, I have put a lot of effort into learning about the Mexican Revolution and making this sway. The revolution is made up of great leaders with great mustaches trying to take Mexico for themselves.

As you can see in the title this blog is about the amazing Mexican revolution. This spectacular event in history has a big impact on the  people of Mexicans to this day. If you want to learn more about this war between awesome mustaches then look at our video.

Welcome to my notebook, these are some pages of it. My book that I did these pages on is “Trapped”. Trapped is about a collapse in the San Jose mine where 34 miners got trapped in the mine 2000 feet below the ground. They have a limited supply of food and oily water from machines. These people has stayed under the ground for a grand total of 69 days.

This one is titled “Digging Deeper” not because of the people trying to dig the miners out of the ground, it because you need to dig deeper into the text of the book to find things the author has hidden in the text. This will reveal the things the author is trying to tell you underneath the text.

This page I did on cause and effect of the book. The first one is one cause and two effects, I concluded this with my notes and some bits of rereading to get the facts clear. In the end I have fully made this cause and effect. On the bottom of the cause-and-effect page is my possible themes of the book, we came up with a lot but they are too simple, so we wrote the complicated themes onto the page.

The Gospel According To Larry

Am I A Humanist?

I am a renaissance humanist because I think that without the renaissance our lives will be very different from what we know now, people will still believe that if you do good things in this life then you will go to heaven, but we don’t know if there is a heaven or not. So people started to question the church, they wanted the church to prove the things they say. Not just blindly accepting everything the church says. The people wanted their time on earth the best it can be, so they tried to make the world a better place, and with that, people started improving their life style and we are still improving now.

Found Poem (The River, The Bass, and Sheila Mant)

The found poem here, is created using the words form “The river, The Bass, and Sheila Mant” by W.D. Wetherell. For the conflict of “The river, The Bass, and Sheila Mant” is a character vs self. The character is the boy, and he wants to go out with Sheila so he asks her. She said yes, and the boy convinced her to go by canoe. Then his muscle memory just took over and put the fishing rod on to the canoe without really knowing it. When Sheila came, he pushed the canoe into the water and she climbed on, but in the middle of the lake, Sheila said she thought fishing was dumb. Then a largemouth bass took the bait, he knew that the fish was a big one, and he really wanted to catch it. Then he remembered Sheila Mant said that she hated fishing, so he hid his rod and hoping that the fish will calm down. Suddenly Sheila asked him why is the boat going backward, the boy lied it’s the current. Then he padded toward the shore, their destination. To get to the shore, they will need to cross a shallow area, but surprisingly, after they have gone through, the bass is still on! Then he made up his mind, girl or  fish, he chose girl. He hesitated then cuts the line and let the fish go free.

These last few weeks we have worked on a big project for our grade for the semester. this link is to what I came up with at the beginning of the assignment.  Link to Plan  I did this project with Scott, he did the torch that goes above the box. I was confident that this would work. On the first day, I coded the instructions onto my Circuit Playground Express. In the next class, I did the actual making of the box. I glued the box together and left it to dry, next I sprayed four sides of the box but can’t do the top and bottom because it is impossible to flip it. then I let it dry, and the next class I did the bottom.

The very next class I went to the design lab to finish my box, then Ms. Kim told me that I needed to simplify my project. So I canceled the spray paint for the box because I wouldn’t complete it in time. So I started the sewing, I first put my Circuit Playground Express onto the fabric and the speaker, and now I don’t have time to finish it. the most important lesson I had is to make sure your project is compatible with the deadline. Before you start, you must let the teacher know what you’re working on so you can at least complete it.  Another lesson I learned is always let the teacher know what you are doing at all times.

The code part is fairly easy to get the touchpads done, but the output is not that easy because I wanted the sound to come out of the speaker. the code just doesn’t want to work.  I tinkered about this for a long time and I finally got it right. Now I know how to use everything on Make code, just because trying to find out how to output from A0.

Then another thought came over me, the sewing. the sewing is the main part of the project so I got to sew some of it in class but I finished it in time. Then it wouldn’t work. I checked my code and it has nothing wrong. I also made my dad check it, but it is still wrong. I suspected it to be the hardware’s fault. I tested the speaker with other pins and it worked. So I re-sewed it and it worked. Then it hit me, I didn’t think about the time left for the project. I had to rush and do everything. After simplifying almost everything, I finished.

This is the code I have been tinkering with the whole time.

“In this unit of circuits, we are assigned to make a pin/bookmark” (Scott Wu, 2021, May 5 ) this famous introduction for this unit is very useful for these blogs. ANYWAY, let’s get into the actual topic. For this unit, I choose to make a pin and this pin is an exploding rectangular prism. I got this idea from my drawing teacher (很不负责) he suggests I start simple. I also l did a Mega Rayquaza and the Minecraft pumpkin. This is fairly easy, but getting the Led into and on the felt is the hard part.