So much plastic has been produced that if you tie them together, they could circle the globe 4200 times. All this plastic kills 100 million animals per year. Plastic is negatively affecting the world in many ways. Governments should ban single-use plastic because it damages the environment, harms animal species, and is hurtful to our bodies.

Firstly, plastic litters our planet, pollutes our air, and dirties our oceans. Researchers have found that over 8 billion tons of plastic have been produced, and only 3 billion have been recycled. The remaining 6 billion are dumped into landfills, oceans, and onto the streets we live on. The cost to clean up all this garbage is even greater than the manufacturing price of plastic. Cleaning up all the plastic in the US costs 11 billion dollars while the manufacturing price is only 6 billion. Additionally, over 90 percent of our world’s pollution comes from plastic production.

Secondly, plastic puts animals in danger of plastic consumption and entanglement. 1 out of every 3 animals are being harmed, or even killed by plastic. In the past 40 years, 50 percent of wildlife has disappeared. Marine animals provide 50 percent of our aquaculture production, without them, 56 million people would go unemployed and 700 million people would live in poverty. If we don’t make a ban on single-use plastics, more wildlife will disappear.

Some might say that plastic is a necessity to life. That may be true, we use single-use plastic bags, bottles, wraps, and much more. According to a survey, over 95 percent of the people said that they used single-use plastic every day. However, plastic is also very hurtful to our bodies. 99 percent of our plastic comes from fossil fuels. According to a study conducted by Harvard, burning fossil fuels releases pollutants that lead to early death, heart attacks, strokes, and asthma. Plastic also leaks out dioxins, phthalates, vinyl chloride, ethylene dichloride, lead, cadmium, all of which are toxic chemicals that can harm or even kill us. Banning single-use plastic would help us improve our health.

Imagine walking in dirty streets with garbage littered everywhere, Imagine swimming in the ocean with plastic bags floating around, Imagine a dark and foggy sky. Our future may be like this if we don’t make a change now. Reports conclude that by 2050, oceans will have more plastic than fish. Governments should ban single-use plastic because it kills wildlife, animals, and even us, humans.

This prototype is a zoomed up sensor that goes inside your nose. When you smell something, the scent automatically goes into the sensor. The carved in foam represents the sensors and the hook goes onto your nose. This is connected to earphones and when you want to know where and what the smell is, it will tell you. It’s inspired by the hearing aid and contact lenses.

For our first Product Design unit, we created a lightbox with layers featuring the landscape of a place that we miss. For my lightbox, I chose to make Mount Hood, a ski resort. I used to live in Portland and went skiing there a lot.

My biggest success in this project was that all of my layers fit correctly in the box and made the scene properly. No layers were covering up any other ones and none of them were too big or too small.

One skill that I learned while making my Lightbox was using Adobe Illustrator. I learned how to use pathfinder, find icons and put them in, and make shapes. I also learned about using masking tape, such as cutting it out using the exactor knife. At first when I tried cutting it out, I couldn’t even cut through it or trace it onto the right place but after a little bit I got better.

Something that I’d like to change about my lightbox is the spacing. The layers are kind of squished with the lid and it’s a little crowded. The lights are too thick and are taking up too much space. I would want to cut the lights to make it take up less space.

One piece of feedback that I got was adding more detail into the layers. All of my layers have simple designs but I didn’t add any drawings or lines on the layers so it was a little too simple. If I could do this again, I would make the water have some small lines showing some small waves.

Overall, I think my lightbox was a success. Even though some parts weren’t too good, it was still pretty good and made the Mount Hood scene.

“What was so great about me? A dyslexic, hyperactive boy with a D+ report card, kicked out of school for the sixth time in six years.” -Percy Jackson. Even though Percy is different, many problems can still apply to him. Percy Jackson would have a much more cheerful life if he had a positive mindset, learned about ADHD, and made new friends.

Firstly, if Percy Jackson became more optimistic, he could learn to find positive parts in different circumstances. In the book Percy Jackson and the Olympians, he wrote that “Just when I’d started to feel accepted, to feel I had a home in cabin 11 and I might be a normal kid – or as normal as you can be when you’re a half-blood – I’d been separated out as if I had some rare disease,” on page 127. Even though his situation was bad, he could’ve still thought about the positive sides. For example, he could think about how he was a son of one of the most powerful gods in history. In the article, “How to Focus on Studying”, it gave the tip, “Negative thoughts make studying all but impossible. If you find yourself frequently repeating self-defeating thoughts, try reframing them into more positive statements.” For example, a negative thought would be, ‘Why I have to be so different?’. If Percy used the advice from the article, he could change the way he thought, ‘I am special but that doesn’t make me worse than others, I may even have better abilities.’ This would help him become a more positive and cheerful person.

Secondly, Percy Jackson would be much more hardworking and happy if he got informed about the many positive sides of ADHD. Percy had many negative thoughts such as, “But Mr. Brunner expected me to be as good as everybody else, despite the fact that I have dyslexia and attention deficit disorder and I had never made above a C- in my life.” He has low self-esteem and is an unappreciative student, Percy has a fixed mindset and doesn’t try to improve. In the article “New Ways to Think About ADHD”, the author wrote, “One study from Purdue University showed that gifted students with ADHD scored higher in creativity tests than gifted students without ADHD.” This piece of evidence would help Percy because it would teach him about how students who have ADHD have a different way of thinking that could be very useful in many situations, knowing this would help Percy become happier.

Lastly, Percy would be more cheerful if he made positive relationships. In the article, “5 Benefits of Healthy Relationships”, it wrote that, “One study even suggests that a lack of social relationships has the same effect on health as smoking 15 cigarettes a day.” This study would be useful to Percy here, “I started feeling cranky and irritable most of the time. My grades slipped from Ds to Fs. I got into more fights with Nancy Bobbit and her friends. I was sent out into the hallway almost every class.” Even though Nancy was annoying Percy, he could still try to control himself and change their relationship into a positive one. That way, he could live a healthier and brighter life.

Everyone needs a trusted friend, even half-bloods. To have a more joyful life, Percy should be optimistic, educated about his situation, and build stronger relationships. All this could help anyone, even demigods.

How to Focus on Studying

New Ways to Think about ADHD

Happiness is one of the many important emotions that we feel, we should never fake any of them. Some people may think that happiness causes laziness, however, studies have found that happy people can be more productive. Happiness can also benefit health, safety, and attitude.  Even though our world has developed and people have become richer, it doesn’t necessarily mean we’re happier. Happiness can change lives, we should all be aiming to add it into our lives.

My graphic novel, Reflection, is about a girl who gets pulled into a book and meets the characters. In order to get back home, she needs to defeat the monster that is attacking the town.

My biggest takeaway from grade 6 science is what independent and dependent variables are and how to tell them apart. If I were to write my report card, I think I would say that I still need work in constructing scientific explanations but I’m confident in labeling models. I would want to do more classes related to animals in science next year.

For my reading project, I read This Savage Song and Our Dark Duet by Victoria Schwab. I think this series is really good but sometimes it can be a bit confusing. The project I did shows my thining by showing all my thinking with evidence. This stretched me as a reader since I never did any work with antagonists before and how the setting affects characters.

Early Humans and Us

My question for this was “How have tools influenced humans throughout time?” We made a thinglink with an infographic, a video, and 2 primary sources related to the question.

Finding the primary sources and making the values and limitations went well because I could find a tool and then list its values and limitations for the early human one and then find a tool that has the same use for modern humans. It was hard finding the information to answer my question and finding the information for my infographic because there weren’t that many websites that had a lot of information about what tools were used. If I did this again, I would change my question into a community one since there was a lot of information about that. 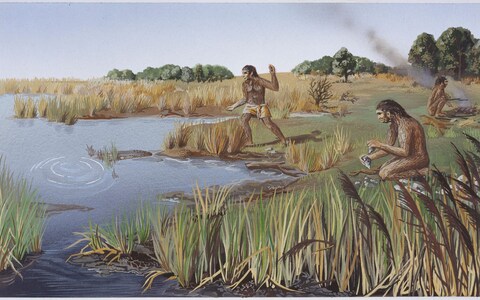