– What was the hardest thing about this project? ​= Since we didn’t have long time to work on the planning part, our planning was not really specific, and we had a lot of changes in our project. When we made changes to our cup insulator, it was hard to make the other pieces because as we changed one of them, we got to change the other part we have to make.

– What are new skills you learned in this project? ​ = I learned what materials is good for keeping the energy (tempeture) also how to keep a tempeture of hot water in 10 min. There was a lot of difference between the cup without the insulator and with the insulator. When there was no cup insulator, the tempeture decreased 20.9 °C in 10 min. When there was a cup insulator the tempeture decreased only 10.8 °C, which is a lot different from the one without the insulator. I realized that there are many ways to save the energy.

When we put the first layer to it, the second layer have to be bigger because the size of the cup got bigger as we put the layers.

We solved the problem by making the part after we stick to the first layer and measure the size again, so we don’t waste the materials. At first, we were making those part at the same time but as that did not work, we changed our plan to make each part separate.

C – The cup insulator helps the cup to keep the tempeture of the cup for a period of the time.

– What are you proud of? ​ I am proud that we keep the hot water for a long period of time.

– What would you do differently? ​ I would make my design planning clearer and more specific so next time, there won’t be many problems we have to fix during the making part.

– What are some limitations your group experienced in this design challenge? I think the biggest limitation was time, as we did not have enough time to remake, I believe that next time when we have more time to work on, so our insulator would get better and better.

In my design class, we did Cardboard Arcade project. My partner was Ruby. We chose a game called table soccer. Table soccer is really similar to soccer game that people normally do. But the difference is that it is small and the people and only move side and kick.

The biggest obstacle is the space between two soccer players. Since we made the court first, it was hard to have 6 teams in the small court. If we have only little space between two people, they will bump each other and make the players break. That we think about that the 4th grade students came and it really happened. So for the next time if I do this project again I will change the size of the court that don’t make the people bump each other.

The thing I learn and developed were the sketching. So at first we drew a sketch that is kind of complicated and the final sketch we have was 3D and the sketching was clear that many people can understand and our sketching also have a lot of details that we have now.

Overall, I think the project was successful because the idea we had was good and we cooperated together even in hard situation.We was in different country and we had to connect, that was difficult thing for me. I like the idea we have, because other group didn’t have the kind of idea we had and I believe that soccer is popular sport in many country that boys and girls can join. I main reason I felt successful was that the praise from 4th grade students. Many students said that the game is fun and that kind of things made me really happy.

I really like this project that made me want to do it again.

This is my Where I am from poem. I hope you enjoy reading this. 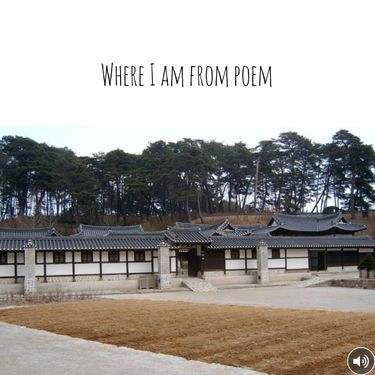 Where I am from poem
Click to read this book, made with Book Creator
https://read.bookcreator.com