The following tutorial steps students through setting up a Story for a specific class in DX. Stories can only be set up by students and shared within your class. Sharing can be between you and the student, the student and selected students or between the student and the entire class. Content that can be shared using a story includes text, images, video, audio and other files linked from OneDrive.

How can I use DX Stories in my class?

This tutorial will step you through recording your voice, using GarageBand, and adding loops for background music and sound effects.

How can I integrate Podcasts in the Classroom?

Here are some specific ideas for integrating audio recording into your curriculum:

Story is KING! Without a story your video is just unrelated pretty pictures. All videos have to have some kind of story or theme that holds it together. Without a compelling story everything else in this post doesn’t matter.

Photographers and videographers refer to the Rule of Thirds as a cornerstone of taking good shots. Put simply, don’t place the subject of your photo directly in the middle of the frame. Have them one third into your frame from either side. Watch the video below for more info.

Lighting will make or break a shot. There are two parts to great lighting. The first is to make sure your subject is well light. If you’re videoing people make sure their faces are well lit. This can be as easy as filming near a window or outside.

This video gives more detailed ideas for shooting at the golden hour.

Make sure you capture the best sound possible. People will watch less than perfect video but poor audio quality will have them clicking on to something else to watch very quickly. Here are some tips to ensure you capture good audio.

Film in a quiet place where you can control background noises. When you get to your filming location, stop and listen. Listen for noisy fans, humming refrigerators or barking dogs. If your location is noisy fix it.

Have your microphone up close to your talent. This may mean using a mic on a boom pole but it can be much simpler than that. It may be as simple as getting your camera closer to your subject. I once stuck my iPhone in my actor’s shirt pocket and used the Voice Memos App to record the audio as I filmed. It was a back up to a fancier audio recorder I was using. As it turned out the batteries in my audio recorder died so I used my iPhone’s audio for the last few minutes of the video. Nobody noticed.

If you want to learn more about capturing audio the Vimeo Video School Blog has lots of resources including Sound good, feel good: things to consider when capturing audio. It is good  for anyone wanting to do a deep dive into capturing audio for videos.

Background music can be great but be purposeful when you use it. Your favorite song may not be the best music for your video.

Instrumental songs—songs without lyrics—are usually best because the brain can’t multitask. If people in your video are talking while there’s a song with lyrics playing in the background, the viewer’s brain tries to listen to both sets of words and it can’t. At least it can’t do it well. Scientifically, this is known as cognitive load.

So use music without lyrics but that’s not enough. It’s important that the volume of the background music is kept much lower than the actors speaking in your video. iMovie has a cool feature that lets you automatically drop the audio levels of the background music. It’s pretty handy. Use it but also check that it’s done it right by listening carefully to your entire movie. You may find that you have to make some further adjustments.

If you’re looking for more audio ideas Vid Authority has some more in depth tips for using background music in videos.

There you have it—Story, Shot Composition, Lighting and Sound. Control each of these elements and you’ll be on your way to your first Oscar! 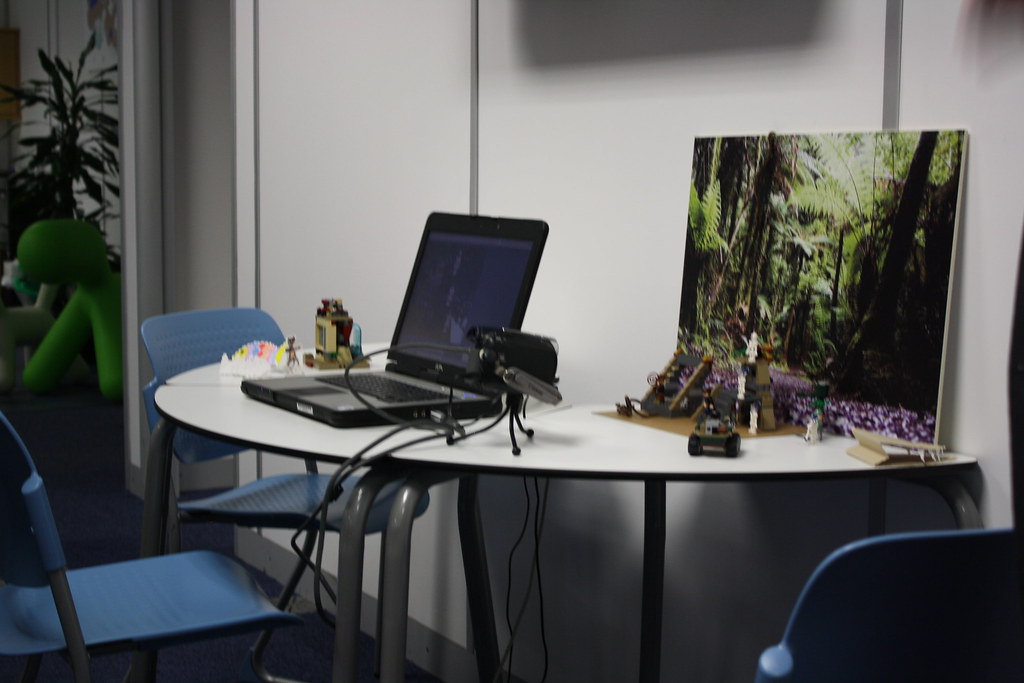 Digital storytelling is a very broad topic so I’ll focus on two types–the Common Craft style and stop motion animation. Common Craft is a company that explains complex topics using a combination of stick figures and simple drawings. Libraries in the Internet Age is a good example of their work. You can head over to their website for more examples.

Another good example of this style of video is Casey Neistat’s Draw My Life.

Stop Motion animation is based on the idea that you string a number of still photos together in software like iMovie and then have them play back in sequence. This video from Mashable gives a quick explanation.

There are a lot more videos that explain stop motion. Here’s one that shows how to make a lego movie and another more general tutorial from Sony.

You don’t need much. Here are the basics:

There are some apps that can streamline the process. iMotion and Stop Motion are both free and can help get the job done.